COSCO BC Volunteer Training Opportunity - Northern Vancouver Island
BCHC is excited to be working with the Council of Senior Citizens Organizations of British Columbia (COSCO BC) to provide regional training opportunities for "seniors helping seniors". Volunteers will learn to facilitate valuable health promotion workshops in their community on topics such as age-friendly communities and mature driver safety. On November 21, 2012 a training will be held in Nanaimo for new volunteers living anywhere in the Northern Vancouver Island region that are aged 55 and up.

Please visit the COSCOBC website for more information on how to register or contact Sheila Pither at (604) 684-9720 or pither470@shaw.ca

Expression of Interest letter is due November 27, 2012 for the first round of funding. Please visit BCHC's  Municipal Alcohol Policy Program page for more information or contact Challayne Kenney at (250) 952-9177 or hccoordinator@bchealthycommunities.ca

In 2011-2012 the United Way of Greater Victoria (UWGV) piloted the Engaging Neighbours: Community Tables in the neighbourhoods of Oaklands, Gorge-Tillicum, and North Park. UWGV collaborated with BCHC and The University of Victoria’s Office of Community-Based Research (OCBR) on the Community Tables project to create the space for cross-sectoral community conversations. These conversations resulted in identified strategies for taking action at the community level.  The final Pilot Phase report, prepared by OCBR, is now available online here.

And another update about the Chandler-Gonzales Pathway!

The last update, submitted by community member Hazel Currie in our April issue
indicated that the Victoria City Council had unanimously agreed to re-open the Chandler – Gonzales Pathway, a public walkway in Victoria, providing a safe route to a local elementary school and a pedestrian-friendly link for the entire community.

The walkway served the community for the better part of seven decades, before being closed in the 1970’s due to concerns from adjacent neighbours – but the city had the foresight to retain the property as a public asset and is now officially re-opening the pathway on November 7, 2012 from 10:30am - 11:00am at the Chandler Street entrance to the pathway. Mayor Dean Fortin will help cut the ribbon and Olympian Simon Whitfield will lead a group of children through the pathway to commemorate the official opening.

***  If you have been involved with, or have a great example of a community that
demonstrates healthy communities activities please contact us at bchc@bchealthycommunities.ca  *** 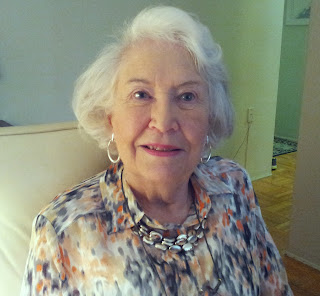 Vancouver’s West End is home to some 11,000 people aged 55+. It should therefore be no surprise that seniors have played a key role in shaping the character of the neighbourhood.  Like West Enders of any age, seniors are a diverse group. Many are financially secure, while others live on limited incomes. Many are physically and mentally healthy and active, while others live with a range of physical and mental/ psychosocial ailments. Some are relative newcomers, while many others have lived in the neighbourhood for decades. One thing they all have in common: they love their neighbourhood and they are committed to maintaining its health and vibrancy.

84 year old West End Seniors’ Network (WESN) member Peggy Casey exemplifies that commitment.  As a resident of the West End for the past 7 years, Peggy has always been an active person, balancing a challenging professional career with the duties of raising a family of six children. When she was forced to retire from work at age 59 due to macular degeneration, her activities shifted to the charitable sector. As a resident of Richmond BC, she got involved with the Richmond Committee on Disabilities and the CNIB. She started a support group for the vision impaired, and a lawn bowling group for the blind, eventually heading to the Paralympics in Atlanta in 1996. In 2005, Peggy made the decision to move to the West End.

“I walked into Kay’s Place [one of WESN’s three locations] to see if could help out in some way,” Peggy recalls. I ended up volunteering at the information and referral desk and taking the Senior Peer Counselor training!”

In 2010, Peggy joined the WESN board of directors as the Vice President. In addition to her involvement with WESN, Peggy also sits on Translink’s “Access Transit Users Advisory Committee” as well as hosting a twice-monthly group for vision impaired seniors in the West End.

Peggy is one of the nearly 700 members of the West End Seniors’ Network, the majority of whom are seniors, and many of whom volunteer their time at WESN and/or other organizations in the city.  Through their actions they demonstrate what it means to ‘age well’ and to contribute their time, energy and skills to making their community a better place to be for people of all ages and abilities.

*** BCHC is looking for Community Champions! If you know anyone that deserves to be celebrated
in our Monthly Newsletter please contact bchc@bchealthycommunities.ca ***

An aging population and climate change are two of the biggest issues facing Canadians in the 21st century (Statistics Canada, Klein & Barter, p.3). Seniors are a segment of the population with heightened sensitivity to climate hazards including heat-waves, cold snaps, poor air quality and water contamination. However, as both policy makers and community groups work to pass environmentally sustainable policies and promote changes in behaviour that reduce green house gas emissions and prepare the public for health challenges related to climate change it is important that seniors be included as more than a vulnerable group.  As we seek to identify solutions to the changing climate, age friendly engagement is an important consideration. Overall, engagement contributes to “building trust, relationships, personal agency and social capital,” and supports an approach to climate change that takes into account the relationship between the environment, social inequality and health. (Klein & Barter, 2011, p.12) Age friendly engagement, particularly when it comes to issues such as the changing climate, also recognizes the contribution of different groups, both young and old, as an asset to the community.

Recent research into attitudes on climate science in both Canada and the United States shows more agreement among Canadians of different ages that there is “solid evidence” of climate change than among Americans. Eighty-two percent of Canadians between the ages of 18-29; and seventy-seven percent of Canadians 65 and over believe in climate change (Lachapelle, Borick, & Rabe, 2012). The level of consensus that exists across age groups in Canada points to the danger of stereotyping seniors as uninterested or unable to participate in working toward environmental sustainability. Translating this level of consensus that climate change is happening into behaviour change requires attention to how policies are developed and communicated. 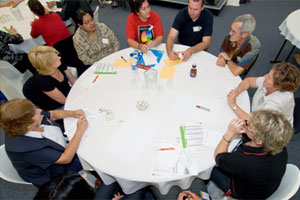 Over reliance on online communications such as the internet can create a barrier to the participation of some seniors who are not familiar with computers. Distributing information through organizations that are part of existing social networks (community centres, service groups, charities, and religious organizations) is an easy way to reach people who aren’t online. Including seniors in a dialogue around climate change means more diversity and participation as well as recognition of the knowledge, experience and skills they can contribute whether related to organic gardening, creative recycling around the home, emergency preparedness or organizing volunteers.

The overlap between the qualities of age friendly and environmentally sustainable communities underscores the importance of combining efforts to address these challenges at the local level and engaging community members of different ages. The role of culture in contributing to climate change is another connection between building age friendly communities and environmental sustainability.  A cultural shift toward seeking contentment through relationships rather than accumulating material goods would benefit both the environment and the health of community members of different ages.

One good example of intergenerational dialogues (between seniors and youth) is the recent “Trust Me Project”, which is a joint initiative between the Victoria Eldercare Foundation, the District of Saanich’s Parks and Recreation Department, the Vancouver Island Health Authority and BC Healthy Communities.  The purpose of the Trust Me Project is to promote dialogue between seniors and teens in Saanich around trust, judgement and shared community spaces. This exciting project’s focus on building relationships makes it a good model for future age friendly engagement on other community issues such as climate change.

Learning from BCHC’s Living Life Fully Project: lessons from an innovative intervention into the complex world of the “child and youth obesity crisis” 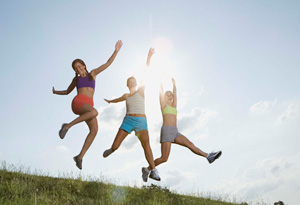 Over the past several years, Canada has experienced a considerable increase in obesity rates among adults, children and youth. Inactivity and obesity are linked to a wide variety of chronic diseases such as diabetes, high blood pressure, heart, kidney and vascular disease, as well as breast, colon and prostate cancer. The two primary strategies that have been widely employed to prevent obesity focus on healthy eating and active living. For example, Canada’s Childhood Obesity Foundation advocates the 5-2-1-0 rule which includes 5 or more servings of fruit and vegetables per day, 2 hours of screen time or less per day, 1 hour or more of physical activity per day, and 0 sugar-sweetened beverages per day. Health Canada recommends that youth participate in a minimum of 90 minutes physical activity every day.

However, as Dr. Phil Hanlon and his colleagues in the Public Health Section at the University of Glasgow note, “no country in the developed world that has been experiencing the obesity epidemic has succeeded in reversing the trend”. Further, they argue that, “the worsening challenge of obesity remains profound and will require new ways of thinking, being and doing”

In addition we created 3 Thinkpieces based on the project that reflect our learnings and aim to provide some practical tools for our readers:

Thinkpiece #1: Supporting the Foundations of Change

Thinkpiece #2: Getting Serious About Innovation

Thinkpiece #3: The Practice of Health Promotion and Links to Healthy Weights

Discussion ~ Strengthening Community Resilience: How to do it in your neighbourhood
Where: Victoria
When: November 6
When: An introduction and shared discussion about ways for creating resilient communities going on around the world, plus an overview of the coming events in the Resilient Neighbourhood series. More >>>

Workshop ~ Resilient Neighbourhoods: Growing a "Resilient" Neighbourhood
Where: West Shore
When: November 15, 6:30 PM to 9:00 PM
What: Learn to evaluate the level of "resilience" your own neighbourhood has, and how to move towards greater resilience in every area of your community. More >>>

Dialogue ~ Building Community, Building Health
Where: Vancouver
When: November 20, 5:30 PM to 9:30 PM (PST)
What: The goal of the day is to refocus health care from treating illness to preventing it by building a healthy community from the ground up. In small working groups, you will have the opportunity to collaborate on one of the three topics below. More >>>

Webinar ~ Home is Where Your Health Is with Michael Shapcott, Director of Housing & Innovation - Wellesley Institute
Where: Online
When: November 22, 1:30 PM – 3:30 PM (PST)
What: This two-hour session invites dialogue from northern communities on specific topics that are critical to improving the health outcomes of northern people, recognizing that community and civic involvement is a cornerstone to healthy people and populations. To register click here

Course ~ Public Engagement and Communication: Influencing Change for Sustainability
Where: Royal Roads University – Victoria
When: December 7,  9:00 AM -5:00 PM
What: This course will explore the “people change” dimension of climate change. It will include an overview of emerging research on behaviour change and present a spectrum of methods for engaging individuals in lower carbon choices, including community-based social marketing. This day will be interactive and learners will be supported in applying specific methods to a chosen issue. More >>> 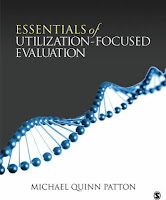 Based on Michael Quinn Patton's best-selling Utilization-Focused Evaluation, this briefer book provides an overall framework and essential checklist steps for designing and conducting evaluations that actually get used. The new material and innovative graphics present the utilization-focused evaluation process as a complex adaptive system, incorporating current understandings about systems thinking and complexity concepts. The book integrates theory and practice, is based on both research and professional experience, and offers new case examples and cartoons with Patton’s signature humor.
(Source: Google Books)
Posted by BC Healthy Communities at 1:36 PM